The beneficial effects of life story and legacy activities
Bereavement, grief, and recovery
Index of Blog Posts
Books and films to help you make it through the night
Recommended reading, viewing, and listening
Cardiovascular disease (and prevention)
Caregivers, caregiving, long-term care, and caregiver burnout
Charitable giving and volunteering

aka Philanthropy (plus donating your body or body parts)

COPING WITH CANCER
Coping with chronic, rare, and invisible diseases and disorders
Corononavirus: the good, the bad, and the practical
Death, dying, and end-of-life care

Plus cleaning and recycling! 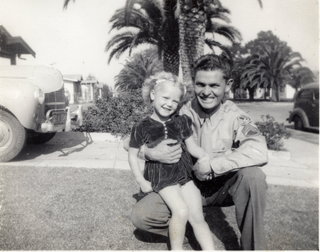 Pat with her Uncle Vern (Vernon Coil), a military hero

Writing about wartime experiences and memories? Some of these resources may be helpful or inspiring:

Organizations for veterans who write

• Veterans Writing Project . Offers no-cost seminars and workshops for members of the armed forces, active and reserve, who want to learn about writing in order to tell their stories. Their core curriculum is Ron Capps's book Writing War: A Guide to Telling Your Own Story. Written by a veteran for veterans, it details the elements of craft involved in writing both fiction and non-fiction. The Veterans Writing Project publishes a blog and a literary journal O-Dark-Thirty .
• Warrior Voices ( Cecilia Capuzzi Simon, NY Times Education Life, 2-1-13). Veterans learn to write the words they could not speak.
• A Million Strong: Helping Them Through (James Dao, NY Times Education, 2-1-13). Serving the surge in military students puts colleges to the test. Teaching veterans to express their experiences helps them heal.
• Veterans group, Maxine Hong Kingston together use writing to heal (Justin Berton, San Francisco Chronicle, 1-7-08)
• Back From The Brink: War, Suicide, And PTSD (Ron Capps, Health Affairs, July 2010)
• Veterans Writing Project: Nation's Heroes Write of Pain, Personal Triumphs (John Bachman, Newsmax, 5-27-12)
• Warrior Writers (based in Philadelphia)
• Syracuse Veterans’ Writing Group
• Veterans' Writing Group of San Diego County
• Black Hills Veterans Writing Group
• Military Veterans Writing Workshop (Writers Guild Foundation)
• The Journal of Military Experience
• The Veterans' PTSD Project , which also has a page linking to resources for veterans who want to write

Pat, what an amazing list of resources for Americans who are reading, writing or researching about wartime experiences. Brava, on providing such an excellent resource.

How One Vet is Saving Lives Through Sharing Stories by April Bell (StoryCatcher for iPhone, 5-23-15)The book: Voices from Vietnam: The Tragedies and Triumphs of Americans and Vietnamese--Two Peoples Forever Entwined by the Legacy of War by Charlene EdwardsThe website: Voices from Vietnam (written and photographed by Charlene Edwards, telling her husband Mike's story and that of many others). "The Americans call it the Vietnam War--the Vietnamese refer to it as the American War. By whatever name, it was a great tragedy. And although the shooting stopped in April 1975, the war and its aftermath rage on in a different way--in the consciousness of Americans and Vietnamese alike." Also worth a look: Voices from the Vietnam War: Stories from American, Asian, and Russian Veterans, for which Xiaobing Li spent seven years gathering stories from vets from different cultures and with very different perspectives on the war.

Also suggested (not a memoir but in the same spirit): Alive Day Memories: Home from Iraq Available on Netflix. Nearly every soldier who survives the Iraq War experiences an "alive day," in which they narrowly escape death on the battlefield. This sobering, Emmy-nominated documentary examines 10 veterans who suffer from "alive day" physical and emotional trauma. Recovering back home, the soldiers discuss the effect their brutal experiences have had on their views of the war and serving their country. The film was executive produced by actor James Gandolfini.

A totally different account of war, an oral history (boots on the ground) gathered by Nobel prize winner Svetlana Alexievich: Zinky Boys: Soviet Voices from the Afghanistan War. Must reading for anyone who wants to understand that war.

Two novels with an entirely different take on war: Going After Cacciato by Tim O'Brien. "In Tim O'Brien's novel Going After Cacciato the theater of war becomes the theater of the absurd as a private deserts his post in Vietnam, intent on walking 8,000 miles to Paris for the peace talks. The remaining members of his squad are sent after him, but what happens then is anybody's guess: "The facts were simple: They went after Cacciato, they chased him into the mountains, they tried hard. They cornered him on a small grassy hill. They surrounded the hill. They waited through the night. And at dawn they shot the sky full of flares and then they moved in.... That was the end of it. The last known fact. What remained were possibilities." And the long-classic Catch 22 by Joseph Heller (who said he didn't write an anti-war novel; he wrote an anti-stupidity novel). Heller's classic satire on the murderous insanity of war, brought to life through the unforgettable character of Yossarian etc. -- with a focus on World War II.

• A Pearl Harbor survivor spent decades trying to forget it. Then one man got him talking. (David Montero, Los Angeles Times, 12-7-16). Writer Ed McGrath gets Lauren Brenner to talk about his experiences surviving the bombing in Pearl Harbor, Hawaii, of the USS Arizona by the Imperial Japanese Armed Forces, bringing the United States into World War II. Of the ship's crew of 1,512 men, only 335 made it out alive. Sometimes memories are so painful that it takes patience and time to get the storyteller to reveal them. Bruner and McGrath's book is Second to the Last to Leave: The Story of the USS Arizona’s Greatest Escape.

Just wanted to thank you Pat for putting up my book, The Last Ring Home. It's Memorial Day weekend and my film is being shown on APT/PBS around the US this weekend. Kind regards, Minter

A day in your honor. Good to hear from you. Will look to see if it's being shown at the AFI Docs Festival.-- Pat

Marc Leepson moderated (and BIO posted this writeup about) Writing About the Vietnam War, a panel at the Biographers' International conference (2018) that featured Kai Bird (author of The Color of Truth: McGeorge Bundy and William Bundy: Brothers in Arms, Max Boot (author of The Road Not Taken: Edward Lansdale and the American Tragedy in Vietnam, and Heath Lee (author of The League of Wives: The Untold Story of the Women Who Took on the U.S. Government to Bring Their Husbands Home, due out in April 2019). Leepson is the author of Ballad of the Green Beret: The Life and Wars of Staff Sergeant Barry Sadler from the Vietnam War and Pop Stardom to Murder and an Unsolved, Violent Death. Interesting insights into publishers' changing views of the market for books about Vietnam (they're "in" again). Writes Leepson: 'Before starting her book, Lee had heard that publishers were not interested in books about the Vietnam War. That, she said, is “totally not true now.” She thinks the release of the Ken Burns documentary on the war has spurred interest in books on the subject. In addition, wars can be “a great backdrop” for biographies. A war, Lee said, “brings out the best and worst in people,” providing a vivid portrait of a subject.'

A Long Way Gone: Memoirs of a Boy Soldier by Ishmael Beah. A powerful memoir of Beah's time as a child soldier during the civil war in Sierra Leone. As William Boyd, in the New York Times, put it, "perhaps the first time that a child soldier has been able to give literary voice to one of the most distressing phenomena of the late 20th century: the rise of the pubescent (or even prepubescent) warrior-killer." First, he and a few friends are separated from their families when rebels arrive in their village, then they spend months scrounging for food and struggling to survive and elude troops "recruiting" boy soldiers, then, at 12, he becomes a boy soldier, along with a small group of friends. As boy soldiers, supplied with all the drugs they can consume, they go on a two-year killing spree. What comes after is also an interesting part of Beah's story.

• Fold3 (for the third fold of the flag) and the Fold3 blog. Original historical and military records from the National Archives, “most never before available  Read More
Post a comment