Coronavirus: the good, the bad, and the practical
Aging with grace, spirit, wisdom and safety

The beneficial effects of life story and legacy activities
Bereavement, grief, and recovery
Index of Blog Posts
Books and films to help you make it through the night
Recommended reading, viewing, and listening
Cardiovascular disease (and prevention)
Caregivers, caregiving, long-term care, and caregiver burnout
Charitable giving and volunteering

Plus cleaning, recycling, and pest control! 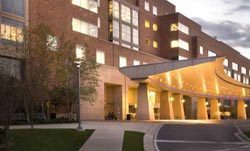 A couple of miles down Rockville Pike, south from the Beltway (495), on the right, sit the 27 centers and institutes that form the main campus of the National Institutes of Health. (Across from them on the left is the National Naval Medical Center.) Turn right on Cedar Lane, and before reaching Old Georgetown Road you pass the huge NIH Clinical Center on the left, behind the Children’s Inn.

My introduction to Building 10, as the NIH Clinical Center is known, was personal. Early in the 1980s, my nephew by marriage, Will, was having crushing headaches that doctors in Florida were not dealing with, partly because he was not covered by health insurance. Will had Addison’s disease, a rare condition (John F. Kennedy also had it), in which the adrenal gland produces insufficient steroid hormones. I had been told that the NIH often treated people with rare diseases and might have a protocol that would accept Will. I doubt that I knew what a “protocol” was (it’s a research plan or study), but I called the number I was given, described Will’s condition, and within a few weeks Will’s doctor had sent NIH the necessary information and Will was admitted to the NIH Clinical Center for study.

None of us knew what to expect, and I was stunned by what happened next. After a workup more thorough than any he had ever had, Will was told that a ventricle in his brain had collapsed, preventing cerebral fluids from draining—hence the headaches (the collapse was related to Addison’s disease). Neurosurgeons installed a shunt that allowed fluids to drain from his brain into his abdomen, joking that he wasn’t an interesting patient—his was a common problem. Will recuperated at the Clinical Center for a while, undergoing far more testing than he would have had in a normal hospital, and marveling at the attentive care he got. Moreover, because the Clinical Center is a research institute, the health care provided, including his follow-up visit a year later, was totally free to him. His part was to undergo more tests than patients in a normal hospital would experience.

Visiting Will aroused my curiosity, so when I landed a contract to write the center’s history, I was delighted. While I was working on it, my Salvadoran friend Dinora complained of persistent stomachaches, went to a gastroenterologist, and learned she had lymphoma, a cancer of the lymphatic system—which had shown up first in her stomach. As it happened, she had stage 4 of a B-cell lymphoma—exactly what a researcher at the National Cancer Institute was studying. Within two weeks Dinora was signed up for a protocol to test a refinement of a standard chemotherapy protocol. From both curiosity and friendship, I accompanied her on many of her outpatient visits.

“That’s the first time I ever felt a doctor listened to me,” she told me after the first visit. Her treatment and follow-up over the next year was incredibly thorough, including frequent CT scans to verify that the cancer was gone.
My personal connection to the work of the Clinical Center did not end there. While writing the center’s history, I began volunteering a couple of times as a blood donor at the NIH Blood Bank, My blood type is A-negative, in big demand, but after my second donation I got a letter saying I had a rare blood type: my blood lacked several proteins and therefore formed no antigens to them. For patients whose bodies had a problem handling those antigens, my blood was valuable. Some months later, when I learned that two of my cousins have a protein deficiency that made them and their mother subject to frequent blood clotting I told the Blood Bank, which enrolled me in a special study, tested my blood, and assured me that I did not have the same condition.

The NIH is not the kind of hospital you go to for a diagnosis. Traditionally you have to have a diagnosis already before you go there, and they accept you only if you are useful to one of their studies. (With rare diseases, which are often undiagnosed or misdiagnosed, sometimes the path to acceptance in a protocol is different, but that is a whole other story.)

Nor is the NIH a place you would go to in an emergency. If you broke a leg there, for example, they would probably take you over to Suburban Hospital (across Old Georgetown Road) for treatment.

But it is a fascinating and immensely worthwhile place, where I would not hesitate to seek care if I had a health problem they were studying.

Interested in being a patient or a volunteer?
For most protocols, researchers need both patients with a particular disease and “normal” or “healthy” volunteers to serve as controls for a study. Whether you have a disease that fits a protocol or want to serve as a healthy volunteer (for which on many protocols you may be paid a small stipend), you can get the information you need at the telephone numbers and websites below.

IF YOU HAVE A DISEASE OR CONDITION for which you are seeking an active protocol: http://www.cc.nih.gov/participate.shtml
or call 1-800-411-1222 (TTY 1-866-411-1010) The people who answer this phone are generally helpful. They’re the ones who helped me find the protocol in which my nephew was enrolled.

Interested in donating blood?
NIH provides free parking spaces for blood donors Monday through Friday from 7:30 a.m. to 5:30 p.m. Call 301-496-1048 to schedule your appointment, or e-mail nihbloodbank@mail.cc.nih.gov. For information online about donating to the NIH Blood Bank, go to
http://www.cc.nih.gov/blooddonor/index.html


* * *
For a full list of NIH institutes and centers, go to http://www.nih.gov/icd/index.html
(where you can just click on the acronym to go to a particular institute or center).

You can read selections from Building 10 at Fifty at http://www.patmcnees.com/the_nih_clinical_center_27675.htm.